Long beautiful climb up thru the valley

In the morning it’s stil a bit cloudy and wet, i have a nice breakfast at the common room while charging the electronic stuff, just before i’m done i have to remove the tape to check the blister, damn it’s red at the edges and painfull, i have to do something about it asap or it will get worse! A bowl of hot water filled with soap and then let the toe soak in it for 15mins should do the trick, again i’m happy for the microwave. 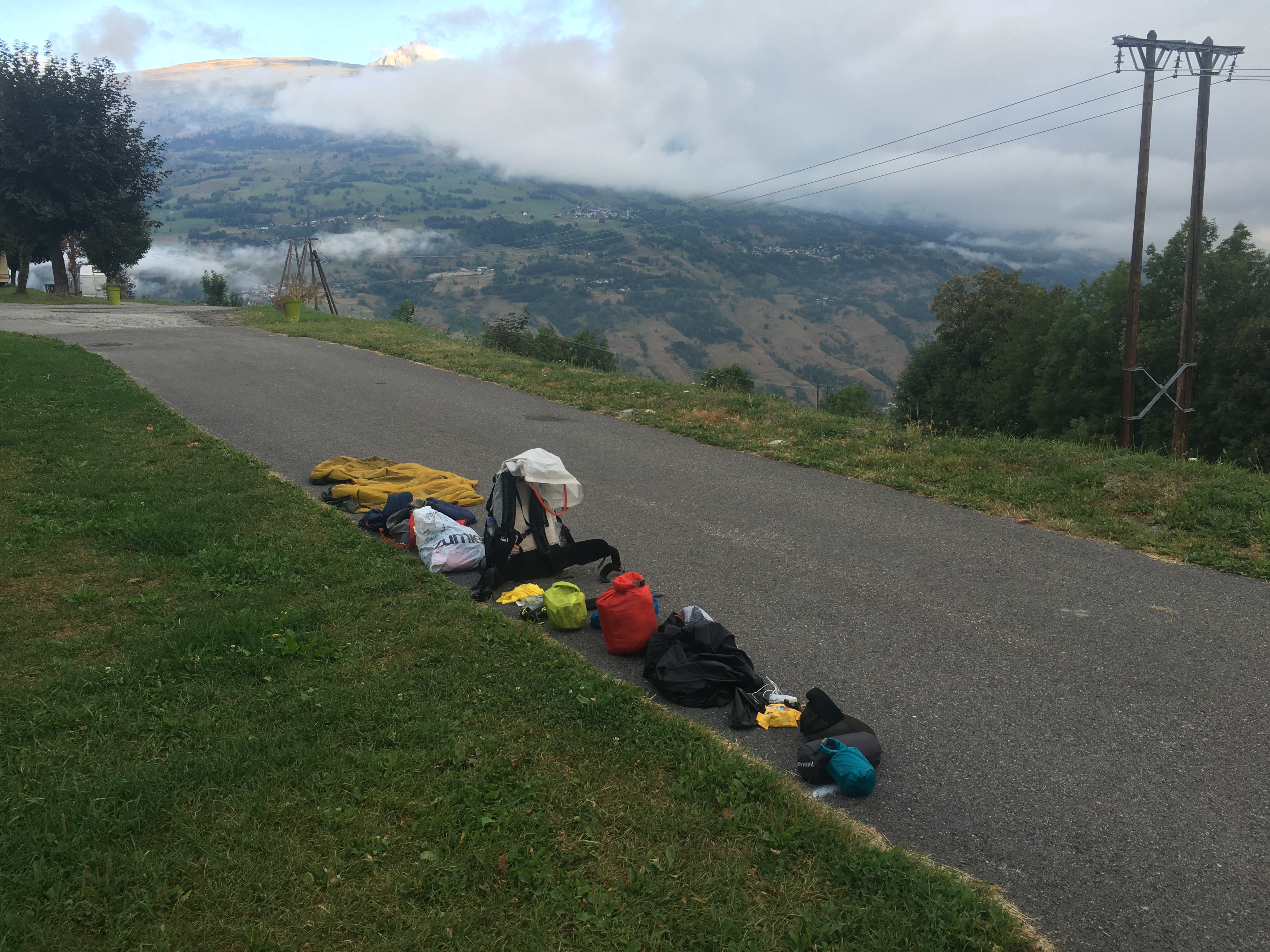 The clouds are clearing, it’s going to be a nice day 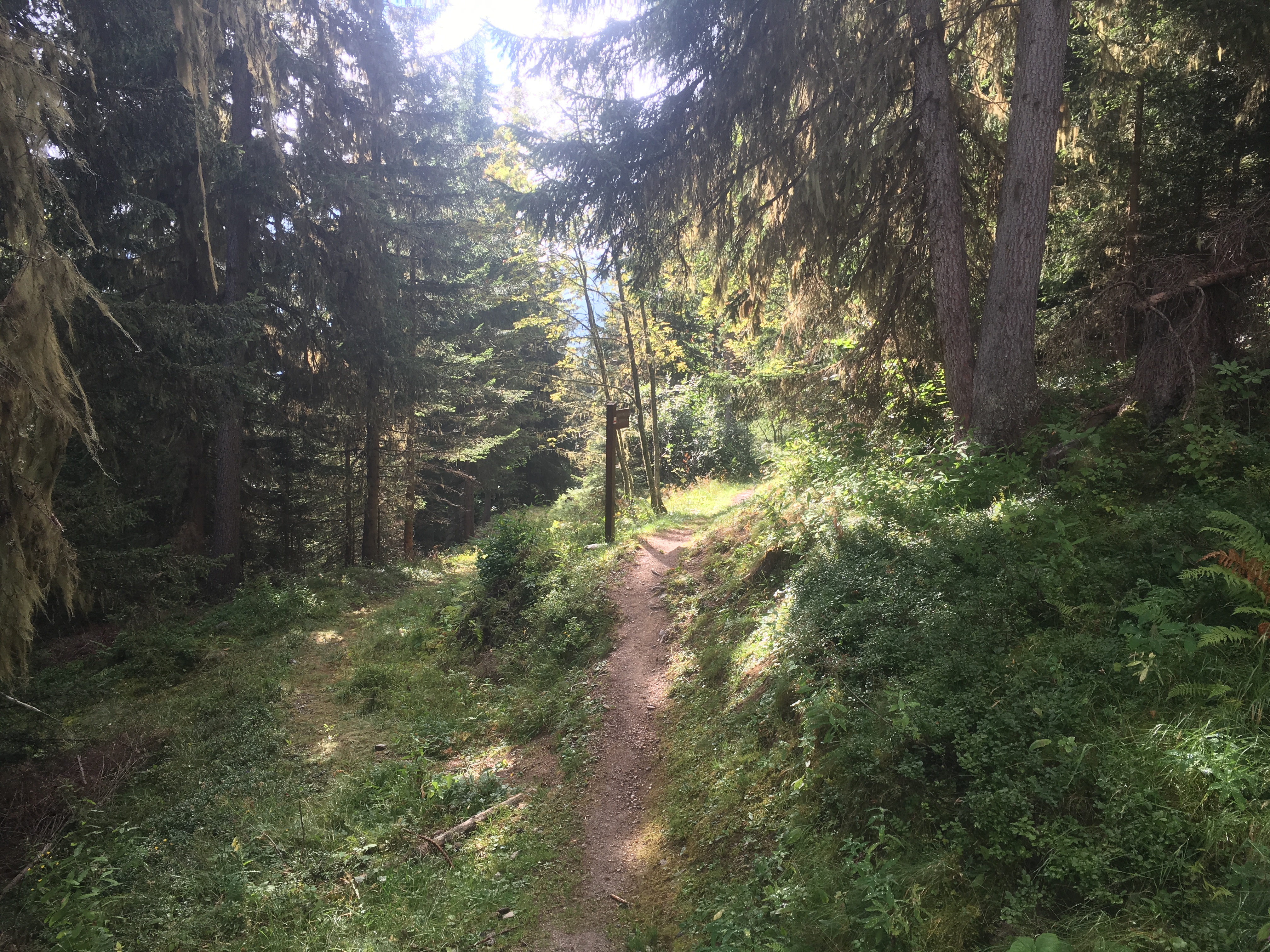 So many trails, none of them are signed that well

With the toe happy and taped in 3 layers i’m off to climb the first ascend of the day, there are trails everywhere and i get on a wrong one and have to backtrack 20mins, damn! But After the first climb it easy hiking over the next 10km a bit down and up again, the trail follows the river/stream up thru the valley, super pretty and very warm, with no cloud in the sky and the sun baking down.

The trail is super cool and there are fresh mountainbike tracks here and there, i would love to Bike here… the first half of the trail to Chalet-Refuge de Rosuel is in dense forest, and i only get short glimpse of the surrounding mountains, as the trail meets the river i get the chance to get some more water and have a short snack break, the next 4-5km is out in the open, it’s super warm now. 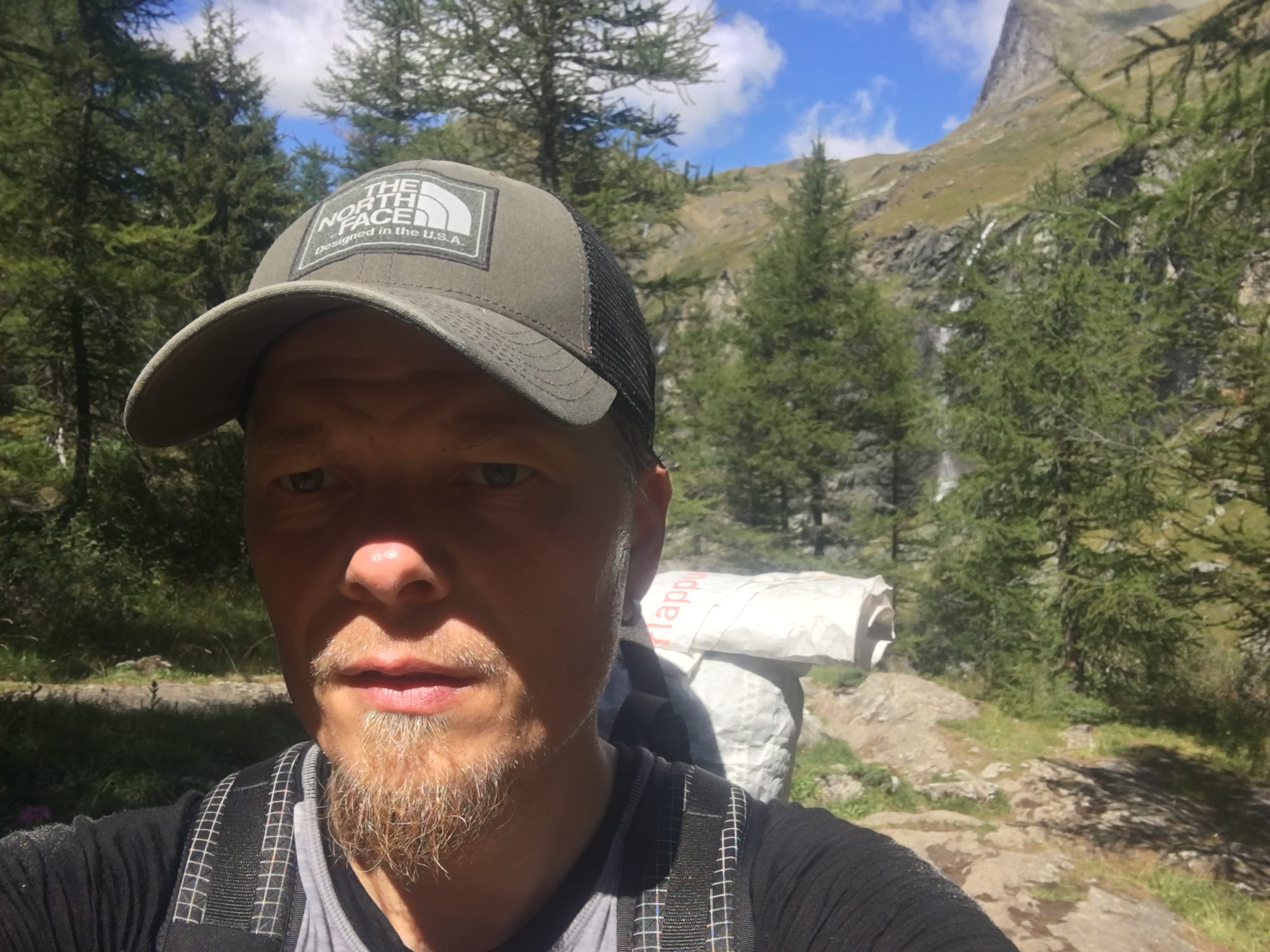 On my way toward the lake

After a long and hot hike on gravel road i reach Chalet-Refuge de Rosuel, or more precise the parking lot in front of the refuge, it’s huge, with camping tables and a toilet, i decide to have a nice picnic in the shade of some trees, it’s nice, i have the whole place to myself.

My goal for today, with the blister and all, is to make it to Refuge d’Entre-le-lac, a nice refuge by a lake up on a plateau, but first i have to climb the 1000m up to get there. At first it’s nice just to get of the gravel road and up the small trail leading up to the lake, it follows the rim of a ravine and it quite steep and rugged at places, theres beautiful views of the cliff face on the other side of the river, as i’m coming over the worst part and the trail i getting a bit more mellow, a helicopter arrives and starts to unload a man unto the cliff wall by wire, maybe it’s a rescue mission or just practice?

This part of the trail is so cool with big boulders, grass slopes and a small stream, it’s pure joy, i take it slow and just enjoy it, after a final push up a steep rocky trail i arrive at the lake, or rather the stream that leeds to the lake, it’s in the middle of a nice meadow and further on i can see the lake, the walking is nice along the bank, at around 14:30 i’m at the refuge. 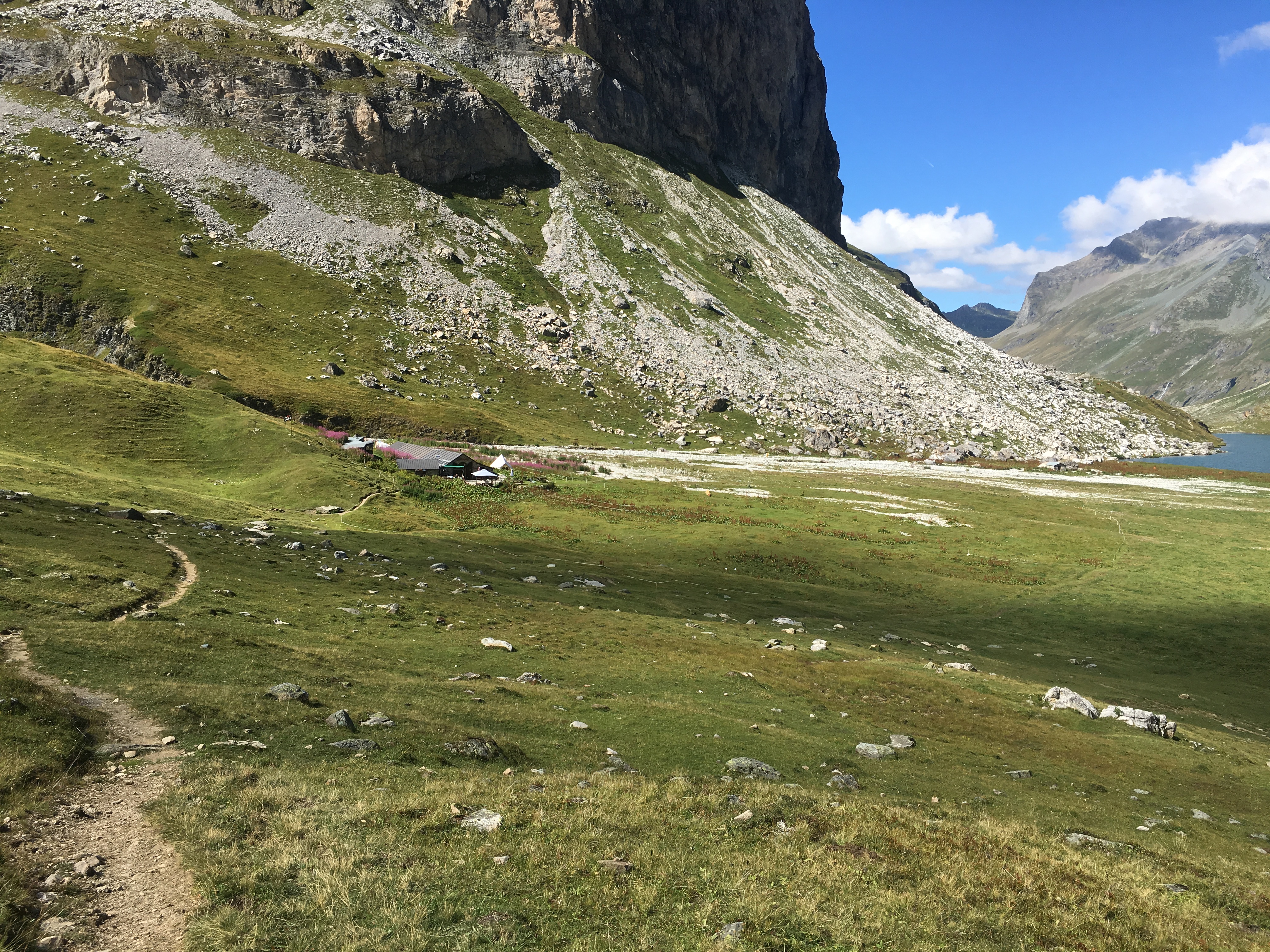 Perspective, the cliff in the background is enormous

This refuge could be super nice, but it’s not! It’s messy and badly maintained, half the dish wash i outside to dry, and there’s only one other guest there enjoying the sunshine – looking like he just came down from Mount Everest!

I order 2 orangina’s at the price of almost 7€, damn that’s steep! Anyhow i don’t want to spend the night here, and according to my guide book, there’s around 2hours and 500m ascend to the next refuge, my feet and blister feels fine so i decide to head for Refuge du Col du Palet, witch is at around 2600m, so this will be the highest point i have ever slept, looking foreward to this! 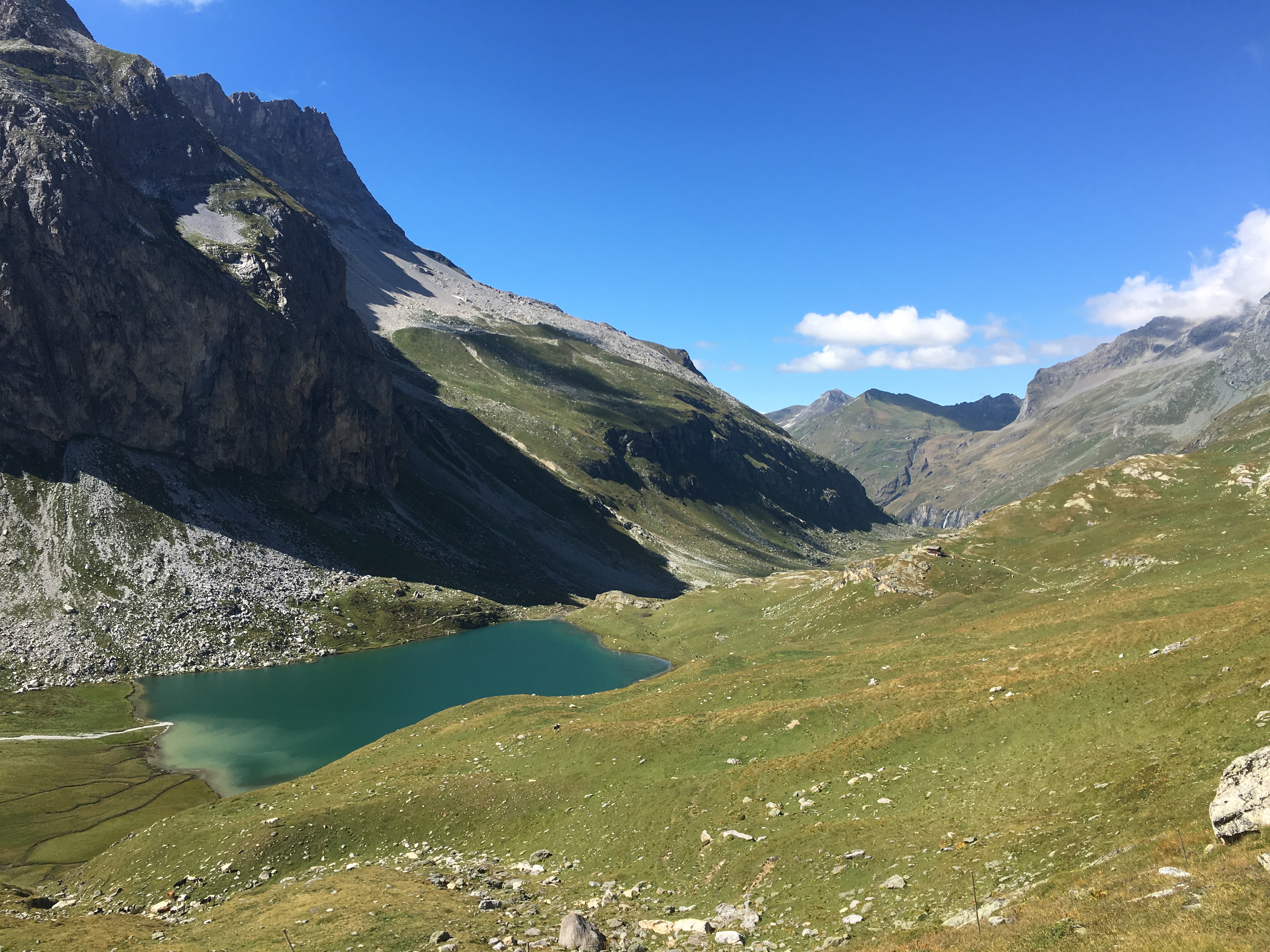 Looking back at the lake

The first ascend i super steep and narrow, but it’s only 2-300m, and it’s over in about 30mins, the terrain flattens out and i’m all alone in this nice High alpine meadow, this has to be the best part of the trail so far! And having it all to myself is just a big bonus! This is where i truly feel alive.

There’s a lot of people at the refuge, some are sunbathing, some are drying clothes and others are just having a beer, i fall into the last category and have a nice big beer while cooling down and enjoying the nice view, the refuge is just below the Col and out of the worst wind, i order a sleep and dinner/breakfast combo, it’s around 55€, but in the end it’s worth it.

I am to sleep up under the roof where there’s around 20 beds, most of them are already taken, but i manage to find one next to the Wall so i only have one person beside me tonight!

We have a nice dinner in the common room, witch is just about full, i’m sitting at the “english” table, meaning that all the people are from England, 4 of them are hiking together, one is like me hiking alone, and me… it’s nice to chat with people again! at 21.00 we are off to bed, and as i suspected – 10mins later the snorring begins! The ones with earplugs have a nice sleep.

Not my tent! i only discovered that you can camp outside the refuge, after i had ordered and payed for the bed and dinner